Story of the Week

Our first stop this week is in Florida. I was a police officer for almost 30 years and made hundreds of Driving Under the Influence arrests. I have heard every excuse, or so I thought. Check out this headline- Florida Woman Blames Her ‘Big Breasts’ for Failing Sobriety Test. The officer observed Maureen’s car repeatedly weaving across the center line and then take up two parking spaces in the parking lot she pulled over in. The deputy wrote in his report, “When I told her we were going to do some roadside sobriety tests, she told me that I needed to understand that she is big-chested and if I asked her to close her eyes and balance she is not going to balance well,” the deputy wrote.” I think the alcohol was really the deciding factor here and not Maureen’s anatomy. The story also pointed out that Maureen was 5’6 and weighed 216 lbs. She should know, “Weebles wobble, but they don’t fall down.”

Second Place goes to this headline out of New Jersey: Intended Victims Fight Back During Cellphone Robbery, Killing Would-Be Thief. It seems that 30 year old Glenn approached two college students and asked to use their phone to call a ride. One of the students offered to call someone for him. That wasn’t good enough for Glenn. He punched the student in the face and grabbed for the cellphone. The other student, a former high-school wrestler grabbed Glenn to keep him from hitting his friend again. The wrestler put Glenn in a headlock and the other guy called the police. The wrestler must have had a really good lock on Glenn, because when the police arrived, he was uncounscious. Glenn, the would-be robber, was pronounced dead a little while later. He had an extensive arrest history for Aggravated Assault and Theft. Well, society does not have to worry about him anymore! 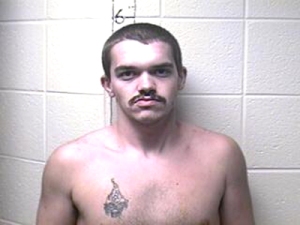 For this week’s winner, we head North to Kentucky and this headline: Cops Bust Naked Burglar Covered In Chocolate, Peanut Butter. The police responded to a report of a burglary at a grocery store and found Andrew, pictured at the left, wearing only a pair of black boots but covered in peanut butter and chocolate. He had discharged several fire extinguishers, spread more chocolate and peanut butter in the manager’s office and used several bottles of Nyquil to spell “SORRY” on the store’s floor. Andrew was charged with Burglary, Indecent Exposure, and Criminal Mischief. I guess Kentucky does not have any 24 hour Wal Marts. If they did Andrew would have fit right in with most of the other shoppers in the middle of the night.