Here is my Top Five List of my favorite books for 2011. Please feel free to add your Top Five in the comments section!

– Andy Stanley. This is a powerful book. I read it and then immediately read it again. Andy is a great communicator and he takes the reader on a journey through the Bible, showing God’s grace from the Old Testament into the pages of the New Testament. This is one of those books that you wish everyone could read. It can help Christians and non-Christians alike get a new understanding of God’s love.

2.  Churched– Matthew Paul Turner. Most people know Matt Turner from his Twitter handle, @JesusNeedsNewPR. Churched is his story of growing up in an ultra-conservative, fundamentalist church and surviving. This is a sensitive and often hilarious look at fundamentalism. Turner really doesn’t criticize them; he just tells his story. 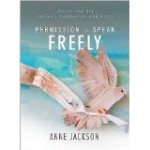 3. Permission to Speak Freely: Essays and Art on Fear, Confession, and Grace

– Anne Jackson. A few years ago, Anne posted this question on her blog, “What is one thing you feel you can’t say in church?” The response was overwhelming. Christians and non-Christians responded and shared their stories of hurt, rejection, and brokenness. The place where they should have been able to go for healing, they felt shut out from. If they shared their secrets in church, they would be rejected again. Anne shares their stories, but also shares her own story of growing up in church as a pastor’s daughter. She describes the pain she felt when she was rejected by church people for not “conforming.” Her transparency as she describes her addiction to pornography, drugs, and alcohol is an invitation to also partake of the grace, healing, and forgiveness that she found.

– Howard E. Wasdin and Stephen Templin. If you like exciting, fast-paced, action-filled books, this is it. This book is more like a ride than a read. Wasdin describes his troubled childhood and how he found purpose and meaning by joining the United States Navy. He eventually became a SEAL and saw action in the First Gulf War. Not content to just be a SEAL, however, he eventually became a sniper with the ultra-elite SEAL Team Six. He saw extensive action in Somalia, during the mission there in the 90’s. The events portrayed in the movie, Black Hawk Down, happened while Wasdin was there and he was involved in that mission as well.

– David Spell. I know I wrote it, but it is a good read. Both of the Street Cop books are collections of stories from my 30 year career as a police officer. Some will make you laugh, others will make you think, but they will definitely entertain you. The chapter entitled, “Prostitutes, Midgets, and Drugs: Busting a Mexican Bordello,” is my favorite chapter.

I would love to hear what your favorite reads were from 2011. Just leave me a comment with your list!

Would you like to help Annie and I have an impact in Brazil? Here is the link. Obrigado! (Thank you!)